Your enjoyment of this book - a detailed trawl through the output of Roger Corman from the early 50s (and including a quick bio) up to date - is going to depend entirely on your ability to enjoy films where you can sometimes see the zip on the back of the monster suit.  In fact, Chris Nashawaty sums this up perfectly in a caption to accompany a picture of the eponymous Creature From The Haunted Sea - “…one of the worst looking (or greatest, depending on your sweet tooth for schlock) monsters in movie history”.  I loved the book, which probably tells you just how big and strong my sweet tooth for schlock is.

Thoroughly illustrated with beautifully reproduced film posters (and wow, they knew how to sell movies then!) and clear screen grabs, this is effectively an oral history of the Corman “factory”, told by the people involved.  From Corman himself, his wife Julie and brother Gene, through writers and directors and actors and crew personnel, this is frank and often amusing and never less than illuminating.  Working to tight budgets (and often tighter schedules), Corman pushed people to be creative and yes, whilst some of the output is stupid, it’s often very entertaining.  He also served as a kind of unofficial film school, giving the first chances to many people who are now Hollywood A-listers - from Jack Nicholson, Sylvester Stallone and Bruce Dern, through Ron Howard, Joe Dante and Jim Cameron, Gayle Ann Hurd, Martin Scorsese, Francis Ford Coppola and Bill Paxton, all of them have their say and none of them utter a bad word about their mentor (other than how cheap he was). 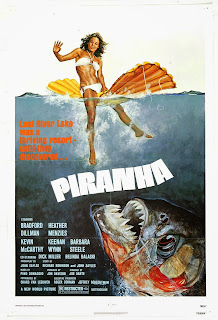 The book is broken down into 5 chapters, each dealing with a different decade and I have to confess that my favourites were the sixties and seventies and moving into the early eighties - that’s when the format seemed to hit its stride, when the talent being supported (Dante, Nicholson, Dern, Howard et al) was on the cusp of greatness and when they seemed incapable of doing a bad job, even when the material wasn’t always as good as it could be.  The later eighties is interesting (I was a happy supporter of the burgeoning home video market myself and loved scanning the shelves in our local video shop) but the nineties and to the present day is a bit more sobering, with the market drying up and a stream of films that seem to be directed by the same two blokes (contradicting everyone else’s mantra that once you got your start, you moved on).  From what I read, none of the SyFy films currently being made will stand up in 30+ years time, as something like Joe Dante’s “Piranha” has.  In fact, I was so impressed by the write-up in the book of that film, I bought it on DVD and watched it with my wife and we both loved it.

Roger Corman is a legend, finally recognised by the Oscars for his contribution to films and he’s shaped a lot of culture that we now readily accept today, believing in genre films even when others didn’t appear to.  This book does him perfect justice, a thorough, wonderfully written and researched slice of movie history that I think is essential reading for those who like their films (on occasion), to be on the cheap, cheerful, sleazy and gruesome side.  I loved it, I wish it was twice as long and I highly recommend it.