The Fifth Annual Westies - review of the year 2013 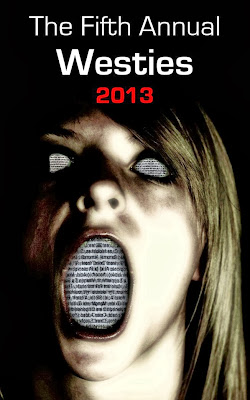 Well this year seems to have whipped by (even quicker than last year, if that's possible) and so, as we gear up for Christmas, it’s time to remember the good (and not so good) books of 2013.

Once again it was a really strong field this year (or a sign that my reading choices are generally pretty good) and places in the top 20 were hard-fought.  So hard fought, in fact, that for the first time ever I had four books that were all - in my opinion - five star reads.  Since I couldn't separate them, I've decided to have a joint first place between all four.

So without further ado, I present the Fifth Annual Westies Award - “My Best Fiction Reads Of The Year” - and the top 20 looks like this:

Joint first:
The Year Of The Ladybird, by Graham Joyce
Joyland, by Stephen King
I Am Legend, by Richard Matheson
The Language of Dying, by Sarah Pinborough

5:  Path Of Needles, by Alison Littlewood
6:  House of Small Shadows, by Adam Nevill
7:  The Bones Of You, by Gary McMahon
8:  Is This Love? by Sue Moorcroft
9:  Stir Of Echoes, by Richard Matheson
10: The Latchkey Children, by Eric Allen
11: The Shelter, by James Everington
12: Shiftling, by Steven Savile
13: Invent-10n, by Rod Rees
14: Pale Kings and Princes, by Robert B. Parker
15: Phoenix, by Steve Byrne
16: Bite, by Gardner Goldsmith
17: Necromancer: Necropolis Rising 2, by Dave Jeffery
18: Guns Of Brixton, by Paul D. Brazill
19: The Fox, by Conrad Williams
20: Urban Occult, edited by Colin F. Barnes


The Top 5 in non-fiction are:

1:  Rod, The Autobiography, by Rod Stewart
2:  The Making of Return Of The Jedi, edited by John Philip Peecher
3:  Parallel Lives: Blondie, by Dick Porter & Kris Needs
4:  The Making Of Scarface, by David Taylor
5:  The Star Wars Archives, by Mark Cotta Vaz