The Demonologia Biblica: 1 (TRES LIBRORUM PROHIBITORUM) has just been published by Western Legends Publishing.  The brainchild of editor Dean M Drinkel, this is a massive anthology of 26 stories, all dealing with demons in some way, shape or form. 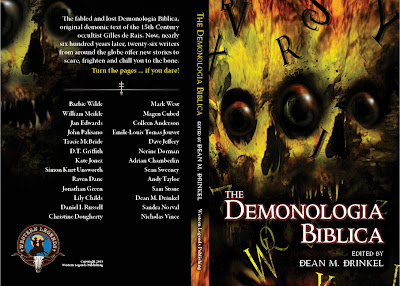 I was approached about contributing a story by Dean at FantasyCon and he gave me the letter N.  My fellow contributor Nick Vance (who played the Chatterer cenobite - how cool is that?) kindly sent me the N section from a demonology encyclopaedia and I chose the Nickar, since I felt it gave me the most freedom.

As I knew it had to be set on or around a lake in Germany, I did some research and discovered the North German Plains.  From there, it was fairly straightforward to set up the characters being at a conference, though the romance angle was mainly to get them out of the building.  Working on this I quickly realised that Google Translate was my friend and I had some fun with the language - the title essentially means False Lake and the town is “Monster Village”.

I like the story and I'm pleased to be involved in such a great project, with a huge array of writers!
Posted by Mark West at 12:23:00