Picture the scene: an isolated country pub; it’s a bitter (which is only fitting, this being a pub) and blustery night. Five weary travellers huddle before a crackling fire. Slowly, falteringly, one of them starts to tell a story - a chilling tale of dark spirits and tragedy. As the first narrator’s (wholly original and never heard before) story reaches its dire conclusion, so another of the band begins to relate their own ghostly tale…

Thus they entertain each other (and an attentive audience that has mysteriously gathered for the occasion) well into the night, pushing back the darkness while populating its margins with malicious spirits and malevolent shades…

will gather at The Staff Of Life pub in Mowsley, near Market Harborough in Leicestershire, to tell original ghost stories before a live audience, in an event jointly organised by NewCon Press and Un:bound.

I’d really been looking forward to the event, ever since Ian had asked me for a “really scary ghost story” back in November of last year and especially since I found out what NewCon and Un:bound were planning to do. I wrote my story (and I think it’s a pretty scary ghost story), I admitted that I’d acted in the past and the stage was set. Then, on Saturday, I got a toothache which combined with the nerves, made me feel quite apprehensive about the whole thing.

I shouldn’t have been, of course. After Google maps tried to send me in the wrong direction, I found Mowsley quite easily. The Staff Of Life was a smart looking pub and, as soon as I got in, saw the Un:bound gang, meeting Adele Wearing, Vincent Holland-Keen and Kat Heubeck for the first time (though Adele & I have been tweeting to each other for a while). My fellow readers - Ian Whates, Paul Kane & Marie O’Regan - were already there and Jay Eales & Selina Lock arrived soon after. I was then introduced to Amanda Hemingway, who I’d first read years back (on holiday in the Lake District) and she was lovely, a real force of nature and full of energy and verve. Our place was set up by the fire and the running order agreed - since Ian was reading on the fly (ie, he hadn’t got a full story written), he went first, I followed him, then Marie read. After a break, Paul read and Amanda closed the show (reading by candlelight and a camera-lamp held by Kat). 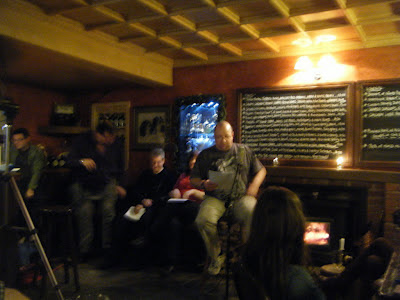 Me reading "Fog On The Old Coast Road" with Ian Whates, Paul Kane and Marie O'Regan

Once it came to my turn, as soon as I’d started reading, my nerves disappeared and I really got into it. I was doing well until about halfway through, when the heat from the fire proved just too much. After a short break - fire closed, stool moved, drink drunk - I resumed and my story went down well, I think. All of the stories kept people’s attention (I don’t know how many people attended, but I counted about thirty people from my vantage point) and it was lovely to be at a reading where you could hear a pin drop. 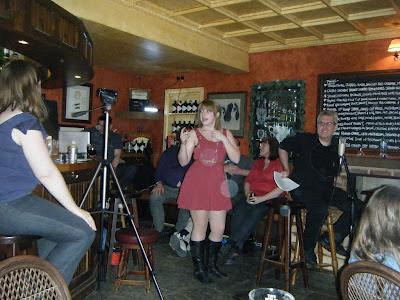 Kat holds forth - from left, Adele Wearing, Ian Whates and me (obscured by Kat Heubeck), Marie O'Regan and Paul Kane (waiting to read)

After the readings were over, I shot some of the wraparound stuff with Vincent and we filmed a round-table discussion on ghosts and ghost stories. By then it was almost 10pm so Amanda left, Ian headed home and Adele drove Paul & Marie back to Harborough, where they were staying for the night. Everyone was shaking hands and hugging, looking forward to meeting up again and there was a lovely atmosphere. I had another couple of scenes to shoot, which I managed without any hiccups and I headed off for about 11pm. Had a great afternoon/evening and now I can’t wait to see the finished film.

Many thanks to Adele, Vincent and Kat for organising such a terrific event and Ian for asking me for a story.