"All That Mullarkey" is brilliant 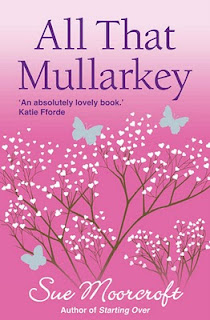 I’ve just finished “All That Mullarkey”, by Sue Moorcroft and thoroughly enjoyed it. This is my review, which I published at Goodreads.com

Cleo is a free spirit, a wonderfully realised character in a gripping, thoroughly entertaining novel of modern life. Told in two parts, the first sees her splitting from controlling husband Gav and then falling pregnant during a one-night stand with Justin. The second part sees Cleo coping with being a single mum to Shona, the return of Justin (he went abroad), who then suffers a dreadful hate campaign and also the return of Gav, who doesn’t quite get the message that things are over.
As with all of Sue Moorcroft’s books, this is told in a light, airy style that belies the technique (and tackles some difficult subjects with deceptive ease), the narrative racing along and never keeping the reader less than gripped. All of the characters are well rounded and clearly defined (Cleo was my definite favourite, whilst little Shona shines through), the locations are nicely realised (and shared with “Starting Over”, some of whose characters cameo in this, especially Ratty - he & Tess got married!) and there’s plenty of Moorcroft’s wry, throwaway humour to help things along.
An absolute stormer of a book, very highly recommended.

As a point of interest, I not only know Sue but I was lucky enough to be asked to critique this for her, when we were both involved with Kettering Writers Group (back in the late 90s/early 00s). I loved it then - to the extent that it’s the novel Beth Hammond takes on holiday with her in “Conjure” - and I loved it this time too - though Clive, Cleo’s potential suitor who’s nice and softly spoken but writes horror for small press magazines, is still a bit too Barry Gibb for me.