Reaping The Dark, by Gary McMahon 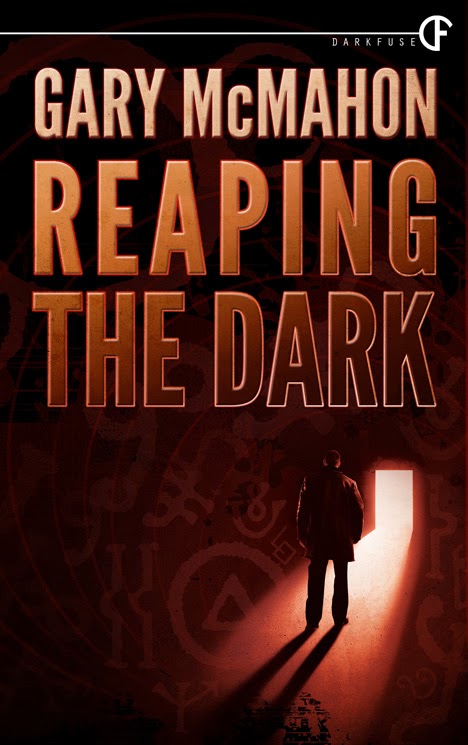 A drug raid that ends in bloodshed…

A violent criminal hell-bent on revenge…

A secret order of occultists…

And something summoned from the darkest depths of nightmare.

Who will survive this long, dark night, and how will it change them? And what kind of horror will be born from the chaos left behind?

If the old adage is true and we reap what we sow, then only evil can be unleashed by Reaping the Dark.


‘Nobody is interested in the driver until it’s time to get away’.

Clarke, the getaway driver in question (known to his peers as Driver Z), was orphaned at an early age and mentored by Oakes, who now acts as his go-between.  Carving out a “walk away quickly” lifestyle with his pregnant girlfriend Martha, who shares his views - virtually everything in their flat is rented - he dreams of becoming a stuntman, realising that his life must change when he becomes a father.  His latest job, a drugs raid that goes badly wrong, takes place at an abandoned Masonic Lodge (which, the news later informs him, was also the base for the mysterious Order Of The Darkened Veil) and Clarke suddenly finds himself in possession of £300k and pursued by a psychopath and something much, much worse.

Apart from the prologue, this is told in present tense and whilst it takes a while to adjust to that, it suits the story perfectly and gives the whole thing a lovely, noir-ish feel.  The tonality of the first half reminded me somewhat of the film “Drive” (indeed, McMahon says the story was inspired by wondering what would happen if James Sallis wrote a Dennis Wheatley story) and there’s also a Michael-Mann-like sense of detachment (it’s a very filmic story, you can almost see the neon soaked visuals as you read).

A mixture of styles, from the existential start to the siege mentality second half, this moves at a cracking pace taking in brutal violence, perceived history, the honour - or lack thereof - of thieves, a wonderful sense of atmosphere and location whilst all the while giving us well-rounded characters who have very believable relationships.

An assured novella, very well told and superbly realised, this is highly recommended.

Available from Dark Fuse and all good online bookshops


Quick note and a declaration of interest.  I make no secret of either my friendship with Gary McMahon, nor my immense respect for his talent.  I was lucky enough to read this novella in draft and the above post was an honest review based on that.
Posted by Mark West at 09:00:00