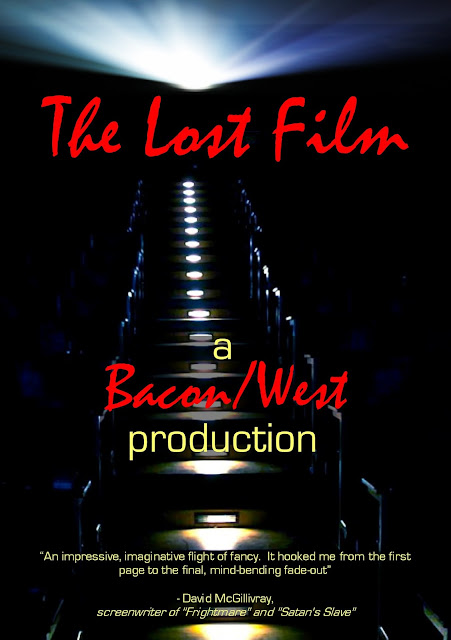 When Paul Madigan accepts an invitation to interview a reclusive film director, he has no idea of the effect his actions will trigger. Sometimes the past is better to remain buried. Some secrets deserve to remain untold.

Lantern Rock lies several miles off the Cornish coast, accessible via a narrow causeway. Home to Lionel Rutherford for over 40 years, the island stands as far more than just the family home of an ageing horror director. The place has a macabre history, filled with sorrow and madness.

With a mysterious woman in tow and an approaching storm set to isolate them from the mainland, Madigan realises that the secrets he has uncovered will have far-reaching consequences for the lives of them all.

The Lost Film
by Mark West


“An impressive, imaginative flight of fancy. Mark West has cunningly woven the exploitation movie industry of the 70s that I experienced into a bizarre private eye yarn and thrown in sex, the supernatural and more besides. It hooked me from the first page to the final, mind-bending fade-out”
- David McGillivray,
screenwriter of "House of Whipcord", "Frightmare", "House Of Mortal Sin" and "Satan's Slave"
"Lights, camera, action...Mark's West's lost film novella will grab your soul by the sprocket holes, pull you into a dark cinematic nightmare, and then re-edit the way you look at the world. Experience it at your peril."
- Gary McMahon,
author of “Pretty Little Dead Things”


The Lost Film is an 80,000 collaboration between two exciting talents writing around a shared theme.

Published by Pendragon Press, it is available as limited (to 100 copies) edition paperback (with an exclusive afterword on the projects origins by Mark West) and an unlimited ebook.


The book was launched at FantasyCon, Nottingham on Friday 23rd October 2015 (which you can read about here).  To a good turn-out, the writers signed for 15 minutes and gave a talk on the background of project before reading out a section each from their own story.

Reviews for The Lost Film

Charlene Cochrane, Char's Horror Corner
I enjoyed these two novellas and I liked the idea of linking them together through film. With the first being reminiscent of an M. R. James story and the second reminding me a little of Robert Chambers' The King in Yellow, one could do much worse than spending a weekend reading these creepy tales.
(read the full review here)

Carrie Buchanan, HorrorBlog UK
There are nods towards many great films and artists throughout both stories. A great read if you are a film buff or enjoy slipstream detective/horror/paranormal stories. with these proving novellas are here to stay and certainly raise the bar. I'm not going to cheapen The Lost Film by rating it - buy it or download it and be transported into a wonderful world of things that are not always lost, but hidden for a reason.
(read the full review here)

Theresa Derwin, Terror Tree
In closing, thoroughly recommended. Two great stories, by two great writers – writers I’m keen to read more of, based on the strength of this collection. Both tales are more traditional horror than I’m used to reading these days – both are more about atmosphere than gore – but that’s to the credit of both writers that both tales work so well.
(read the full review here)

Anthony Watson, Dark Musings
The two stories work extremely well alongside each other - and the authors have cleverly cross-referenced each other very effectively.  The Lost Film is a great example of genre writing, both stories are gripping, high-concept and scary – which is pretty much a perfect combination. It’s a book I highly recommend.
(read the full review here)